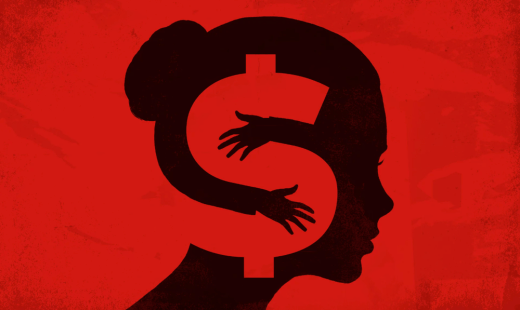 I’ve been embroiled in a knock down, drag out battle for months. I am weary from being pushed around, kicked in the gut, and trapped in a death grip. I’ve cried out for mercy but it hasn’t helped. Whenever I think the fight is finally over, I’m pinned down again. The truth is, this isn’t new. I’ve been bullied my entire life.

Who is this relentless abuser? It’s money. Yes, if money were a person, it would be someone like The Undertaker, a loathsome villain who cruelly preys on my deepest fears. Less dramatically, it would be a handsome narcissist who charms everyone but treats me like a worthless peon (sort of like James Spader’s character in Pretty in Pink). Truthfully, I’ve experienced it as a twisted combination of the two.

One of my earliest memories recalls the moment we were pulling away from my house for the last time after my parents separated. I asked my mom why we had to leave and she said, “we can’t afford it.” That was a phrase I heard a lot growing up.

When I was a little girl, our apartment was broken into a few times. Things were ransacked and stolen. When I was in middle school an irreconcilable family feud erupted over money, forever severing relationships. When I was a teenager, my boyfriend was robbed at gunpoint at the gas station where he worked. As a young adult, I was dissuaded from pursuing a career in the arts because I would “never make any money.” All of these experiences shaped my perception of money. I discovered early on that it creates desperation and evokes fear. I realized that it can destroy even the bond between brothers. I learned that it causes deprivation and a sense of loss. Is it any wonder then that I began to fear and despise it?

As I dedicated myself to a life of service, I also resigned myself to a lifetime of financial constraint. But when I hit 40 I started to realize how sick I was of the limitation. I’d be able to do so much more good in the world if I could afford to spend more. With the clock ticking on middle age, I decided it was time to take a chance on myself and earn a living on my terms.

It wasn’t until I wasn’t drawing an income that I realized how much my self worth was tied into my earnings. Suddenly it didn’t matter how many people I helped or what sort of worthy content I created. If I couldn’t support myself then I was worthless. If I couldn’t pay my bills, I was a loser. If people weren’t paying me for my services then I was a failure. Without even knowing it, I had been conditioned to believe that my value was determined by money… that’s when Money’s mild taunting turned violent.

We live in a society that measures success in dollars. The emphasis is not on living a joyful life or making a positive impact in the world, but on making a lot of money. We’re not encouraged to develop a career that stimulates passion, but rather to find a job that pays well. People are judged by the car they drive, the house they live in, and the clothes they wear. People with money are treated with more respect than those who live in poverty, regardless of the quality of their character. I have always been aware of the absurdity of this and personally hold a different set of values, yet such beliefs still seeped into my consciousness.

I’m tired of the chokehold money has had on me. I know enough about Law of Attraction to understand that negatively focusing on money only repels it from me. I’m aware that in order to win this battle I have to transform my enemy into my friend. But how does one undo a lifetime of subconscious conditioning? How do you keep anxiety at bay when you can’t pay your bills or buy groceries? How does The Undertaker become John Cena? I believe recognizing the pattern is a step in the right direction.

I’m truly grateful for all of my blessings and when I focus on them rather than what I lack, I can feel that grip loosen. It releases further when I stop comparing myself to others and praise my achievements. I can almost feel it let go completely when I acknowledge that all material things are ephemeral anyway.

If I begin to conceive of money as a benevolent helper, rather than a cruel abuser perhaps something will shift. I’m sure I’ll feel less stressed out if I imagine money’s touch as a comforting embrace rather than a painful punch. Maybe all I have to do to win this wrestling match is realize that it’s not a battle at all, but rather a playful game. I suspect some lighthearted perspective and a good sense of humor will work wonders for my overall well-being.

In other words, curb anxiety by halting negative thoughts. Focus on gratitude and appreciation. Acknowledge effort and celebrate accomplishments even if they have nothing to do with money. Maintain a sense of humor. Be generous with time, praise, and love. Regardless of how much money you have, you are undeniably valuable and infinitely rich. Remember that.

Can you relate to my struggle? What life experiences shaped your perception of money? Who would your money be if it were a person? How does money make you feel? Please comment any thoughts, experiences, questions or advice you have about money. I’d love to hear from you!